Attracted by the low cost of living and good telecommunications, digital nomads, or people who earn a living by working remotely, have been flocking to Southeast Asia for years.

Many who have chosen this lifestyle say the advantages such as the change of scenery and freedom far outweigh any inconveniences like attending online meetings in different time zones.

But when borders started closing after the coronavirus outbreak, many travellers headed to the safety of their home countries. The five digital nomads we spoke to stayed where they were, and shared their experiences. 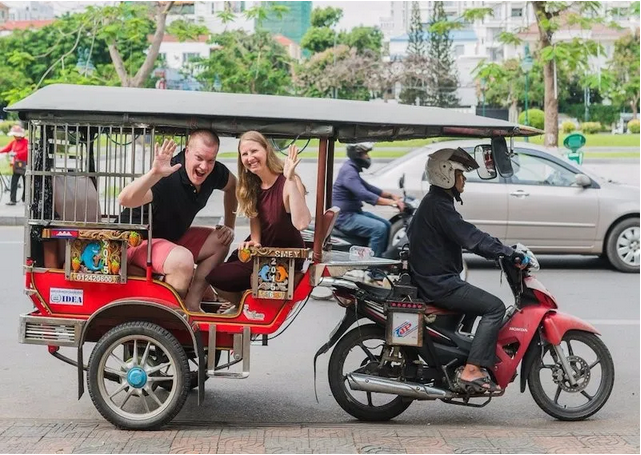 Dutch translator Bram de la Selva (a pseudonym) works in five languages. He was on a 12-country trip when borders closed, and found himself stranded in Taiwan. “I had no idea it would be so disgustingly hot,” he said, but added that authorities have been accommodating.

Briton Tanya Korteling and her husband Andy have been travelling since 2016, and are currently based in Cambodia. She was in Sicily for a conference in March and “had to make a quick decision” to return to Siem Reap, which has gone “from a bustling tourist city to a ghost town”.

Briton Tanya Korteling, who is currently based in Cambodia.

American Jennifer Ryder Joslin and her partner Stevo are teachers who have been completely nomadic for the last two years. They arrived in Kuala Lumpur three days before Malaysia banned foreign arrivals. Fortunately, they had already arranged a housesitting job.

“We got very lucky with timing,” she said.

Canadian Trevor James, better known to his 4.23 million YouTube subscribers as The Food Ranger, has been posting food and travel videos since he moved to Chengdu to study Mandarin in 2014. Last year he and his Chinese wife Ting Ting moved to Kuala Lumpur, and plan to visit every country on the planet.

“It just so happened that two months after we moved, the coronavirus hit China really hard,” he said.

“I’ve been wanting to stay put for an extended period of time for a while, and this pandemic allows me to really be home, which I appreciate,” he said.

The nomads all managed to successfully combine work and travel in their pre-coronavirus lives.

“I just need my laptop and an internet connection,” said De la Selva, adding that he rarely takes time off, but was able to combine sightseeing and visiting people with work while travelling.

Phathanavirangoon, who runs SEAFIC, a non-profit foundation mentoring young filmmakers, said he has been “travelling constantly for the last 15 years”, which is “not good for the environment at all”. He said he is enjoying a break from his usual international schedule.

James said he believes he and his wife have travelled over 300 days a year during the last five years. The lockdown has forced them to stay in one place and explore their new home.

“I’m feeling OK about that because it’s honestly nice to slow down,” he said.

While many sectors have taken a hit as a result of the pandemic, some have actually benefited.

“Our primary source of income comes from online English teaching,” Joslin said. “Since the majority of our students in China have been home from school due to Covid-19, our online teaching schedules are actually busier than normal.”

Korteling, a marketing and data consultant, initially lost some clients, especially in the travel industry. “However, in the last month or so, I’ve secured many new clients in other industries, like food information websites and health supplements. In fact somehow it’s the busiest I’ve been,” she said.

James is happy that domestic travel restrictions have been lifted.

With his videos still approaching a million views, revenue from his YouTube account has slowed but is steady, unlike both Korteling and Joslin, who have seen revenue from their travel blogs (Can Travel, Will Travel, and Two Can Travel, respectively) dry up.

While Phathanavirangoon can work from home, he will need to resume production requirements like location scouting and casting. And he is concerned that personal interaction at film festivals and workshops cannot be reproduced online.

“It’s much less personal,” he said. “And the camaraderie among filmmakers is super important.”

Canadian Trevor James and his Chinese wife Ting Ting, who moved to Malaysia in 2019, and plan to visit every country on the planet.

While finding work is not a problem for now, visa issues are.

Malaysia extended visas for foreigners until August 31, meaning Joslin has time to make new plans, as she would prefer not to have to return to the US.

Korteling is concerned as her visa is valid until the end of July. Normally she could have crossed a border in a “visa run” to renew it, but Cambodia now requires medical certificates, proof of insurance and a US$3,000 deposit for Covid-19 testing or quarantine if needed.

“This has left me in an impossible situation,” she said, adding that they are now considering flying to Greece.

Taiwan has extended De la Selva’s tourist visa but he wants to return to Vietnam, which is currently not issuing any visas, meaning he may have to return to the Netherlands.

“That would be a worst-case scenario,” he said. “I’d be with my family, which would be great, but my return to Vietnam would be postponed for even longer.”

Canadian Trevor James, who has a YouTube channel named The Food Ranger.

What the future holds

The five digital nomads are confident that travel will resume next year, while acknowledging that it may be very different.

Korteling hopes to resume her travel lifestyle in 2021. “But maybe that’s wishful thinking,” she said.

De la Selva sees his future in Vietnam, and he hopes to apply for a long-term visa.

“I think I’ll be travelling less in the years to come,” he said.

James is ready to get back on the road to fulfil the goal of visiting every country, but is mindful of the need to travel responsibly.

“I’d really like to visit family in China and Canada first, and then get back to creating content,” he said. “I’d love to travel to Nigeria next.”

Phathanavirangoon is hopeful that the situation will return to normal by next year.

“Of course I don’t want things to continue like this for much longer,” he said.

Joslin said she and her partner intend to slow down.

“Going forward we plan to travel to countries where we can stay for at least 90 days so that we can set up a home base,” she said. This will give them time for quarantine periods.

“We’ll need to adapt to those changes as they come,” she said. “As digital nomads, we’re used to living a flexible lifestyle.”